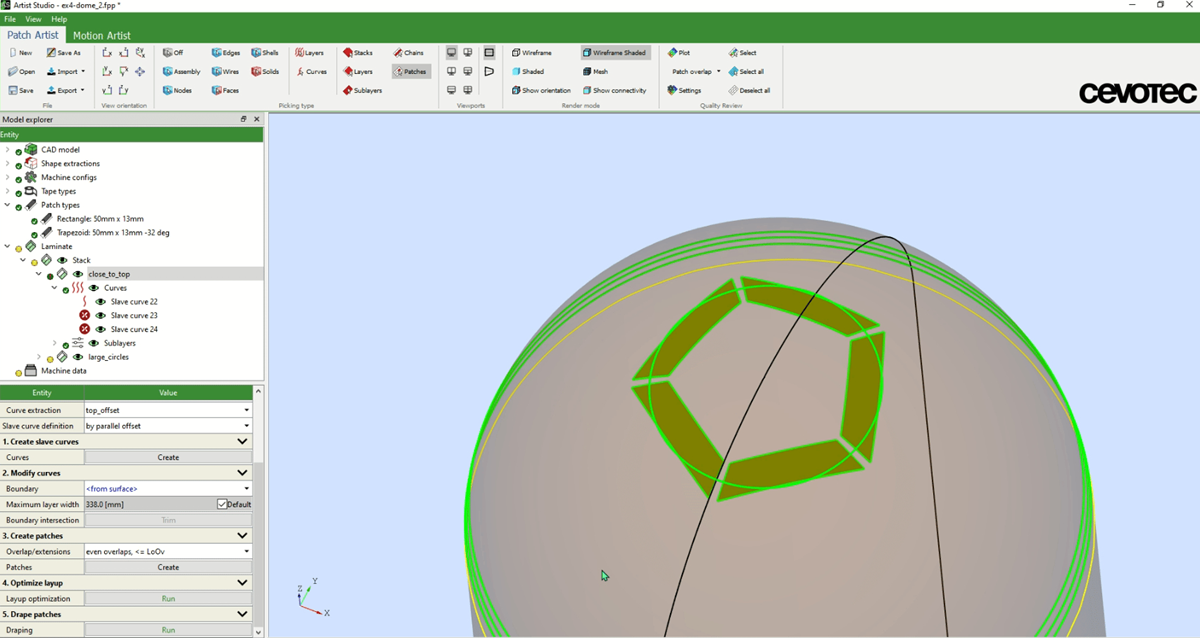 The backbone of Cevotec’s (Munich, Germany) Fiber Patch Placement (FPP) technology for composite pressure vessel dome reinforcement is the company’s CAD-CAM Artist Studio software. Thanks to this, Cevotec claims to support the entire development of virtual products. The Patch Artist module in particular helps engineers create an optimized FPP laminate. Patches are automatically created and distributed along defined curves that cover the entire surface of the component.

The dome areas of pressure vessels are characterized by curves with small radii that can make it difficult to achieve consistent wall thickness with FPP, Cevotec explains. Typical FPP-specific rectangular patches cause overlaps on the inner side and gaps on the outer side of the curve due to their shape. The result is a not completely uniform thickness distribution. This characteristic is usually not associated with a significant change in mechanical properties, but it may still be unacceptable for some application scenarios.

The Cevotec software team is currently integrating trapezium-shaped patches into Patch Artist. With this new function, it is reported that a more even distribution of patches along tight curves is possible. Thanks to their shape and the possibility of freely choosing the angle, overlaps and gaps are reduced, resulting in a uniform thickness throughout the laminate.

The software uses a dedicated algorithm to evenly distribute the trapezoidal patches on the curve. Previously, Cevotec says it has already added support for closed curves, which makes it possible to calculate the optimal overlaps and gaps between patches by moving the patches along the curve. The combination of the new trapezium-shaped patch feature with closed curve support now allows for even patch distribution, resulting in an optimized FPP laminate.

The Keystone Patch feature is still in beta mode and will be fully integrated into Artist Studio sometime in 2022.